Cayenne or Capsicum consists of the dried fruit of Capsicum frutescens, Capsicum annum, or a large number of hybrids of these species and varieties within the Solanaceae (Nightshade) family that are capsaicin rich. Because these plants have been cultivated for such a long time, peppers from them differ widely from one another in size, shape, and potency. They are not true peppers but were misnamed by the early Spanish explorers who confused their pungency with the pepper they were used to, namely black pepper (Piper nigrum) in the Piperaceae family.

The Capsicums are ancient natives of the tropical Americas. The oldest known specimens were discovered in Mexico from seeds found on the floors of caves and in ancient fossil feces. From these samples, scientists were able to conclude that these people were eating peppers as far back as 7000 BC. They also believe that hot peppers were cultivated between 5200 and 3400 BC, making the capsicum peppers one of the oldest cultivated plants in the world. Chili is the Aztec name for Cayenne pepper.

A Dr. Diego Chanca, the physician who accompanied Christopher Columbus on his second voyage to the West Indies, brought capsicum peppers back to Europe. From Europe, Capsicum found its way to most balmy tropical zones worldwide. When these plants were introduced into traditional Indian Ayurvedic medicine, the prototype to the back plasters I can remember my father using when I was a child was invented. In Chinese medicine, cayenne is considered a great digestive stimulant, in addition to being used topically to treat myalgia (muscle pain). In Japan, an alcoholic extract of Cayenne was applied to treat frostbite. Interestingly, I have come across products that I can put into my mountaineering boots as feet warmers that are Capsicum-based.

In 1548, Cayenne was introduced into Britain from India, then known as Ginnie or Guinea pepper because of its cultivation prevalence in this locale. The famous English botanist and barber-surgeon, Gerard, (talented folks did double duty in those days), described it in his classic work, The Herbal, as “extreme hot and dry, even in the fourth degree.” He recommended it for scrofula, an obsolete term for cervical lymph gland swelling due to tuberculosis. In Gerard’s day, scrofula was prevalent and considered a throat disorder known as the King’s Evil. Cayenne is still used by some to treat throat problems such as tonsillitis, laryngitis, and hoarseness.

As a folk medicine in parts of Russia, Cayenne is marinated in Vodka and drunk in wineglass doses as a tonic. I know people who do this today by ordering pepper flavored vodka martinis. Either remedy in wineglassful doses probably covers up a multitude of pains.

An American banker, returning from the Mexican- American War (1846-1848), brought with him some local pepper seeds. He grew plants from them in Louisiana and found that the peppers made a wonderful spicy sauce. He left Louisiana during the Civil War, and when he returned, he found his plants were one of the few things still flourishing. Since the war left him without a job, he decided to market the delightful sauce he used to make. The venture proved to be a very successful business. The man’s name was Edward McIlhenny. The original pepper seeds came from the Mexican state of Tabasco, and his product was, and is, known as Tabasco Sauce.

Once an official medicine

In the United States, Capsicum was an official drug listed in both the U.S. Pharmacopoeia and the National Formulary into the 1950s. It was listed as a carminative (relieves gas), stimulant, and rubefacient (used as a counterirritatant for muscle pain). Cayenne is still an official drug in Germany approved in the Commission E monographs.

Traditionally Cayenne has been used for its stimulant actions, especially with respect to the circulatory and digestive systems. It is said to increase blood flow thus allaying peripheral vascular disorders, decrease blood pressure, tonify the nervous system, increase appetite, relieve indigestion, and act as a carminative (relieves gas and flatulence). It has antiseptic and antibacterial properties and has made for an excellent gargle for sore throats.

Cayenne can be useful as a diaphoretic (a sweat- inducing herb), especially when used with Yarrow. Old timers used it at the first onset of a cold, when a chill was coming on, or to break a fever.

The Chinese believe Cayenne stimulates yang, the masculine active principle in nature that is exhibited in light, heat, or dryness and that combines with yin to produce harmony in the body. They also believe, as do most herbalists, that Cayenne is an accentuator of other herbs, increasing the value and healing properties of other herbs in a formula by carrying them to afflicted parts of the body via its ability to stimulate circulation.

Cayenne or Capsicum gets its name for the Greek kaptos, meaning I bite (no leap of faith here). The origin of the species is buried in antiquity, but experts believe that all of the varieties of chilies came from one species. Perhaps this is why sometimes Cayenne is described as being derived from C. annuum, and sometimes from C. frutescens, and other times from a mixture. For this reason, it makes more sense to judge a Capsicum medicine by the active to which it is standardized and its heat units value. 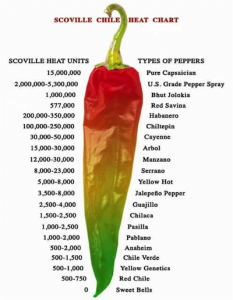 Cayenne consists of dried ripe fruits that contain up to 1.5% capsaicinoids. The major component (about 50%) is capsaicin, upon which most medicinal preparations are based. However, a system to determine how hot a pepper is also exists. The system was developed in 1912, by Wilbur L. Scoville, a pharmacist for the company that developed a muscle rub which they named Heat®. Scoville would mix ground chili, sugar water, and alcohol to determine the number of units a pepper would score. Today Scoville units are still used, but high performance liquid chromatographs do the testing.

A red bell pepper contains very little capsaicin and gets a zero in Scoville Heat Units. The average jalapeño scores about 5000. A wild pepper called the chiltecpin gets 70,000 to 90,000, and Habañeros earn the top spot coming in at 200,000 Scoville Heat Units; the hottest ever registered being 326,000. Can you imagine biting into one of those babies?

What’s Substance P, and how does Cayenne affect it?

Substance P is a neuropeptide that is released from peripheral C type nerve fibers. It mediates the transmission of pain impulses to the spinal cord and on to the brain. For example, inflammation in a joint causes the release of Substance P. This stimulates the release of pain signals to sensory nerves that carry those impulses to the brain via the spinal cord. Now the brain knows that something is going on.

Capsaicin does something that no other known substance does; it selectively depletes Substance P in pain transmission nerves. You see, the initial pain we feel when exposed to red pepper is irritation caused by the release of Substance P. However, the supply of Substance P is eventually depleted, lessening further release, or perhaps production, resulting in fewer pain signals sent to the brain. Depletion of Substance P does not occur immediately, and effective use of a topical preparation requires application four or five times daily for periods of at least four weeks.

Additionally, by virtue of a methoxyphenol ring on the Capsaicin molecule, further pain relief may occur due to interference with two enzymes involved in the inflammatory process, namely lipooxygenase and cyclooxygenase. This action is due to Capsaicin’s antioxidant activity.

Another potential use for Capsaicin, administered as a nasal spray, is to treat cluster headaches. These are migraine-like headaches that occur in clusters, with no warning signals, one to three times daily for several days.

Psoriasis has been linked to high levels of Substance P in the skin. This prompted researchers to try topical Capsaicin as a treatment. After three weeks, significant reductions in redness and scales were observed, suggesting possible Capsaicin utility in this menacing disorder.

Counter-intuitively, research suggests that Capsaicin may protect against peptic ulcers. However, remember that Cayenne exerts an antimicrobial effect, and peptic ulcers are often treated with an antibiotic that goes after the bacteria H. pylori. Additionally, Cayenne has been shown to protect the gastric mucosal membrane against damage from alcohol and aspirin.

Researchers from a major drug company reported that Capsaicin was shown to reduce serious heart arrhythmias and improve cardiac blood flow. While these were animal studies, the results are not too far off folkloric uses.

Topically, creams containing .025% to .075% are applied to the affected area three to four times daily. Treatment may need to be continued for upwards of six weeks

Orally, take 30-120mg three times daily. Look for an indication of standardization to Capsaicin, and how many Scoville Heat Units the raw material evidenced when tested.

We live in a mercurial world, and that’s not a good thing. Although mercury (Hg) is a naturally occurring element—found in the air, water, and soil—exposure to it, even...